If you're playing fantasy hockey this season (and who isn't??), we want to let you in on a secret for beating the experts at their own game. Recently, we were invited to compete against the team of fantasy experts at NHL.com. These guys have access to all the key data, injuries updates, and a wealth of statistics. They know their stuff and you should check out their work. This matchup had a true David v. Goliath feel to it.

The league was setup as a head-to-head league with 16 managers and a draft time limit that dropped from one minute per pick to just 30 seconds per pick after eight rounds. Without the right preparation, a manager would be left in the dust on draft day.

Our strategy was simple, but effective. We would set up our draft kit so that the scoring system was customized to the league's settings and we would use these customized player rankings to find as many value players as we could before our opponents could strike. Because the time allowed for each draft pick was so short, we knew the draft kit would give us a huge advantage over our competitors.

The strategy turned out to be effective and the giant was slain. In the regular season, we won 19 of the 21 head-to-head matchups to finish 1st overall. Click image for larger view. 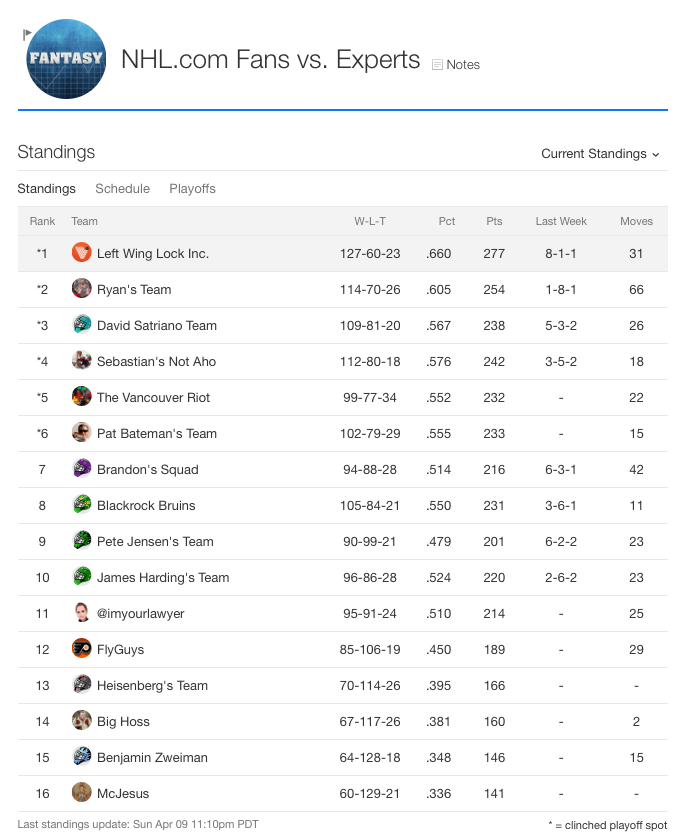 Our team then marched on to victory in the playoffs, winning 16 of the possible 18 categories over the two rounds. The key to this victory was the use of a customized fantasy hockey draft kit at Left Wing Lock. We had the most accurate player projections and player rankings of any manager in that draft and this was crucial to defeating the fantasy hockey experts at NHL.com.

We used a customized draft kit to beat the industry's fantasy hockey experts. Imagine what you can do against the managers in your league! We have created projections and rankings for over 600 NHL players that you might draft this Summer. We've done the research that others won't or can't do. We want you to have this research at your fingertips when you draft your championship fantasy hockey team this year. Get your kit today!